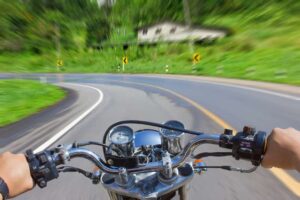 Were you injured in a motorcycle accident in Murrayville, Georgia? If someone else’s carelessness caused the crash, you could be entitled to significant financial compensation for your losses.

Some people wrongly assume that accidents involving motorcycles are the motorcyclist’s fault. That is primarily due to the inaccurate portrayal of bikers as reckless outlaws on TV and in the movies. In reality, that is far from the truth. The majority of motorcycle riders are regular people who are passionate about their vehicles and the freedom they allow. While the motorcycle rider might be at fault for some accidents, many others are due to other motorists who are distracted, intoxicated, drowsy, or otherwise negligent.

Weaver Law Firm’s Murrayville motorcycle accident lawyers have over 20 years of experience helping crash victims demand compensation for their injuries. We’ve recovered significant compensation for our clients and have received widespread recognition from our peers.

If you’ve been hurt, turn to a legal team with the experience to handle your case. Contact the Murrayville motorcycle attorneys of Weaver Law Firm now. The consultation is free and confidential.

How Is Fault Determined After a Motorcycle Crash in Murrayville?

Many people think it’s the police who determine fault for a motorcycle accident, but that’s not actually the case. While police can issue citations for traffic offenses, civil liability is a different matter. It’s up to the insurance companies and ultimately the courts to determine who should be held financially liable for a crash.

In civil lawsuits, including personal injury claims, fault is based on the concept of negligence. In a nutshell, someone is considered negligent if they had a legal duty to avoid injuring another party if reasonably possible, and they failed in that duty. If the evidence shows another person could have avoided injuring you in a motorcycle accident and failed to do so, you could have a case for a personal injury claim.

The Most Common Causes of Motorcycle Accidents

Because motorcyclists aren’t as protected from accidents as people in cars, they often suffer severe injuries in accidents, including:

What Compensation Can Be Recovered After a Motorcycle Wreck?

Victims of motorcycle crashes due to someone else’s negligence could be entitled to compensation including:

How Long Do You Have to File a Motorcycle Accident Lawsuit in Murrayville?

You have two years from the date of a motorcycle accident to file a lawsuit. If you wait any longer, your case will be automatically dismissed, and you’ll lose your chance to recover any compensation.

The Murrayville motorcycle accident lawyers at the Weaver Law Firm are here to help if you’ve been hurt. We’re ready to put our knowledge and resources to work for you. Contact us for a free consultation right away.

What Happens If You’re Involved in a Drunk Driving Accident?

If you have been involved in a collision with a driver who was under the influence of alcohol, you might be wondering what rights you may have to compensation.  Drunk driving is against the law, and it is clearly a...