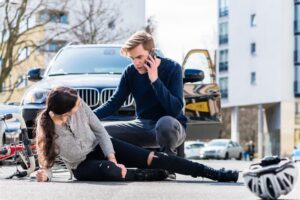 Bicycles are convenient and environmentally friendly options for many Georgians who want a reliable mode of transportation or to get some exercise. With nearly 3,000 miles of bike routes and greenways, it’s no wonder cycling is a popular recreational activity throughout the Peach State.

Even though state traffic laws provide the same rights and responsibilities to cyclists as other road users, bicycle accidents are still sadly common. The Georgia Department of Transportation reports hundreds of bike accidents every year, with 77 percent of them resulting in significant injuries.

If you were harmed in a Georgia bicycle crash, a bike accident lawyer can help you seek compensation for your injuries. Contact the bicycle accident attorneys of Weaver Law Firm to learn more in a free consultation.

Causes of Bicycle Accidents in Georgia

A bike is no match for a vehicle weighing several thousand pounds, so most cyclists know to be extremely cautious when sharing the road with motorists. Unfortunately, even the most cautious cyclist could still be severely harmed or killed if a motorist is negligent.

Types of Injuries from Bicycle Accidents in Georgia

Cyclists lack the same protective features that shield vehicle occupants from the brunt of the impact in a collision. As a result, the following types of Georgia bicycle accident injuries are common:

Can Damages Be Recovered After a Bicycle Accident?

If someone else was partially or fully responsible for the accident that caused your injuries, you might be entitled to recover damages for your losses. “Damages” is the legal term for money awarded to victims in personal injury claims.

With the help of a bike accident attorney, you can establish a solid claim to prove the other person’s liability and demand the compensation you need. This could include money to reimburse you for:

Does an Auto Policy’s UM/UIM Coverage Apply in Bicycle Crashes?

Georgia drivers are required to carry specific minimum amounts of liability insurance by law. Liability insurance covers the costs of other people’s medical and property damage bills if the insured is at fault in a crash.

However, not all drivers comply with statewide insurance laws. Even those who do may not have enough insurance to cover 100 percent of the costs associated with injuries or damage after a bicycle wreck.

If you are injured in a Georgia bicycle accident, this is where your auto policy’s uninsured (UM) or underinsured (UIM) motorist insurance could kick in to help you. UM, and UIM insurance is optional in Georgia, but they’re automatically added to all insurance policies, so you should have them unless you actively opted out.

UM, and UIM insurance is meant to cover your costs after an accident involving a driver with no or insufficient insurance. Luckily, cyclists who carry UM or UIM insurance on their cars can rely on this coverage for bicycle accidents with uninsured or underinsured drivers.

If you are struggling with painful injuries and financial stress and strain after a bike accident, let us help you. Contact the skilled Georgia bicycle accident lawyers at Weaver Law Firm to get started with your free case review.